About a week ago, this post started circulating around the internet. It’s a listing of what the writer calls “The ten best ’emerging’ beer towns.” Naturally, I was happy to say that I was pleased when Florida’s own Tampa came in at number one. Bolstered by the likes of Cigar City, Dunedin Brewery, 3 Daughters, Green Bench, and Florida Avenue, the author (and any self-respecting beer aficionado) would easily be able to call Tampa a Florida craftbeer mecca. 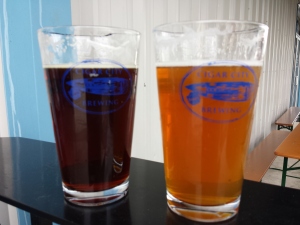 And then I pondered further. And I realized that Tampa has the ‘craft beer mecca’ title pretty well established. Jacksonville is, too. Just look at Bold City, Intuition, Engine 15, Pinglehead, and so on.

For my money, the emerging craft beer town in Florida is Miami.

Seriously, take a look at what the city has. Miami Brewing got started a few years ago and is now distributing across the region. Wynwood Brewing is a year old and is starting to bottle their special brews. Titanic Brewing is established, so is The Abbey. Plus M.I.A., J. Wakefield, and Concrete Beach Brewery are all about to open tap rooms. And if you add Ft. Lauderdale to the mix, then you can add places like LauderAle, Coral Springs Tap House, and the venerated Funky Buddha.

To the author, I say Tampa is a wonderful city (Go Lightning) and a craft beer haven all Floridians are proud of. But they are nicely established. For the major movers in the Florida craft beer industry, set you sights southward.

Sad news from St. Pete as @avidbrewcompany will close at the end of the year due to neighborhood development.
Finally tried the @steveaustinbsr beer from @esbcbrews.
Good morning Florida!
Well, that's it for the USMNT at this year's World Cup, but at least we still have these super, incredibly awesome Miami Beer Cup cans from @beatcultureco and designed by @miamisupply.co!