When it comes to reporting on and writing about Florida-grown beers, it’s almost impossible to not devote a considerable amount of time to Tampa’s venerable Cigar City Brewing. They’re not the biggest, and they’re not the oldest, but with a mixture of quality, innovation, and sheer awesomeness, Joey Redner and company have become the face of Florida beer to many.

And I’m not unhappy about that. They make a lot of good beer, as they showed off at the recent New Times Beerfest in Ft. Lauderdale. 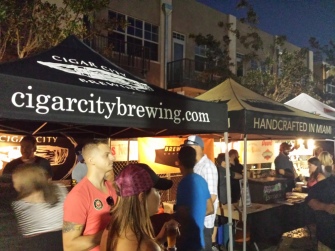 Interestingly enough, the beers Cigar City brought to Beerfest were mostly their lighter, brighter beers. Naturally, they brought their insanely big and hoppy Jai Alai (India Pale Ale, 7.5% ABV, 70 IBU). I am not a fan of IPAs. And Jai Alai, Cigar City’s flagship beer, is everything about an IPA that big hoppy beer fans love, which is why it isn’t my favorite. But I know that Jai Alai has a massive, insanely devoted following, and good for them. I’m always happy when any Florida beer has so much support.

As for the other beers Cigar City brought, two were from their cider division. One was the pretty obviously named Cigar City Hard Cider (Cider, 5% ABV). Many people have only tried the mass-produced, mass-marketed ciders, and they’re fine to a point. But there is nothing like a fresh cider. Yes, ciders are sweeter that beers (obviously), but a good cider doesn’t taste like apple juice fortified with moonshine. This cider is expertly crafted, with just enough sweetness to accentuate some great apple flavors, and just enough alcohol to be noticeable.

For an even more distinct cider experience, Cigar City brought Fight the Power Sour (Cider, 5.5% ABV). First, get to like sour beers. I really do believe they are the future of Florida beer. Fight the Power is a great way to try a good mix of sweet cider flavors mixed with a nice sour punch. I have seen a lot of other reviews compare this cider to Sour Apple Jolly Ranchers. It’s a good analogy to make, but this beer is a little more mature, a little more balanced, and a little less sugary. But the combination of tartness from the sour and sweetness from the cider is a great way to think of this beer. 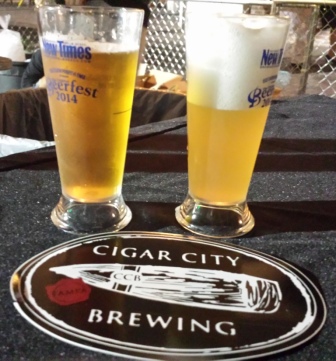 Now, we go all the way sour with their Session Berliner Weisse (Berliner Weisse, 1% ABV), a style which is starting to make a roaring comeback. For those of you unfamiliar with the style, a Berliner Weisse is a sour wheat beer sometimes brewed with lactobacillus, originally brewed in Berlin as early in the 1500’s. Its known for a light and sour flavor, cloudy appearance, and extremely low alcohol content.

Extremely low. The 1% ABV for Cigar City’s Berliner isn’t a typo. It really is that light.

The one flavor that permeates over all else is sour. It is a sour beer first, and then you’ll get all of the wheaty, malty flavors much later. It’s a fantastic, easy drinking beer that is very, very dissimilar to most of what’s available on the market.

I don’t think I’ve ever seen a beer festival that Cigar City wasn’t at. Which is good; they’re starting to become an unofficial ambassador of Florida beer. And with the beers they brought to Beerfest, its obvious they are pushing the vanguard of beer within the state as well.