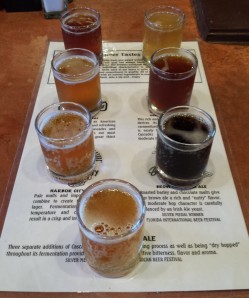 Beer flight from Charlie and Jake’s

While I was there, they did not have any of their Anniversary Ale or Brown Bottom Ale. No matter; they had some pretty close replacements available, and someone like me wouldn’t have really known anyway. For $4.26 for the flight, the selection really couldn’t be beaten. Here’s what they had:

Hop Bomber (American IPA) – Replacing the Anniversary Ale, this was described as the last little bit of beer they have left in the tank when they brew the aforementioned IPA. Since it is soaking in the hops a little longer, it tends to have a bit more bitterness. And they’re not kidding. If you don’t like hoppiness, it’s way too much. Very hoppy, very much for those who love IPA-ness. 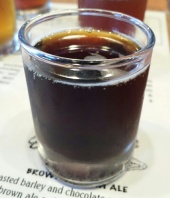 Barracuda Brown (American Brown Ale, 5.4% ABV) – Replacing the Brown Bottom Ale. It was described as being a bit sweeter than the beer it replaced. It’s also an excellent drink. It has a lot of the sweet, nutty flavors that I like in brown ales, but with the mild hoppiness that doesn’t overpo0wer.

Wickham Wheat (American Pale Wheat Ale, 5.2% ABV) – Named for Wickham Road, the road in Melbourne where you will find Charlie and Jake’s. It’s a bit hoppier than many wheat beers, similar to Islamorada’s Sandbar Sunday. It also doesn’t smell like they used a traditional hefeweizen, with a lot of the fruity, candy sweet esters not as present. Very light and crisp, however, and finishes cleanly. 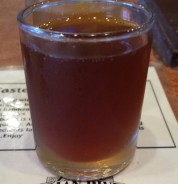 Indian River Red (American Amber Ale, 5.6% ABV) – This was my favorite of their standard, year-round beers. Many other red ales tend to be hoppy (almost like a pale ale), but this one really wasn’t. It let the caramel flavors of the deep red roast shine through. Sweet, malty, and very easy to drink.

Harbor City Gold (Pilsner, 6.3% ABV, 21 IBU) – This felt like a darker pilsner, almost like their recipe for Wickham Wheat without the wheat in it. There was that omnipresent hoppiness to it, and it shares the bright golden color and clean finish that Wickham Wheat has as well. 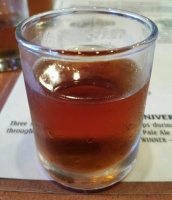 Oktoberfest by Charlie and Jake’s Brewery

Oktoberfest (Marzen) – I love my marzens. This was a great example of one. It has a little punch to it, light brown color, good caramel roast flavor, and the deep bready malt that makes the style so well renown. It’s a great example and a shame it probably won’t be a year round beer. 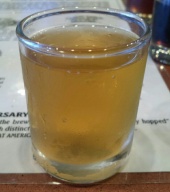 Summer Razz Hefe (Lambic) – Now here was the hefeweizen I was expecting from Wickham Wheat. This is the bright, fruity hefeweizen along the lines of Brew Bus’ Are Wheat There Yet or Floridian by Funky Buddha. Very bright and flavorful, but the added raspberry flavors accentuate the sweetness even more. This is not an overly sweet beer; it’s not like drinking Sprite. It’s just a light, flavorful, wheaty beer that allows its fruit flavors to shine but not overpower. Really great.

Charlie and Jake’s does not give off the feel of a place looking for world beer domination. It really does feel like the kind of place that wants to be an important gathering place and watering hole in the community. That was kind of evident in the sheer number of locals (all of whom knew each other and the bartender) that happened by while I was there. It’s tough to get that feel from them online, however; their web site is very sparse and their social media almost non-existent.

It’s the kind of place you need to really go to. And you should. Especially if they still have Oktoberfest and that raspberry hefeweizen on tap.

Or you just need to find a friendly neighborhood place to call home.

NEW COVID-19 EPISODE! We keep the quarantine train rolling with KJ and Jillian from @leavenbrewing! We talk about their business changes and how they've adapted to this new normal. Find the Florida Beer Podcast now on your podcasting app of choice! Link in bio. #florida #craftbeer #drinkfloridacraft
So we're going to try a thing, Sunshine State Happy Hour! Starting on Wednesday at 5 PM, join us and special guests from Florida and beyond to drink and talk and whatever for, like, 15 minutes or so. It's on Facebook Live for now, so find us at FLBeerBlog, and we'll post the videos on Youtube/Insta/Twitter after the fact. Come join us and our first guests this week @craftbeerballers @benedictbeerblog and @tapthatazpodcast starting Wednesday at 5! And if you want to join us, drop me a line! #Florida #craftbeer #drinkfloridacraft
Curry and @ancientcitybrewing. Gotta make the best of the quarantine, and doing pretty well right now. #florida #craftbeer #drinkfloridacraft #couldbeworse #heytherecoolcatsandkittens
So we are going to start doing some live streaming in the coming days... Sunshine State Happy Hour! Afternoons @thegreatbeeradventure and I will drink beer, talk beer, invite guests and more. What's the best way you think we should do our livestream? And do you want to come on? Reach out and say hello! #florida #craftbeer #drinkfloridacraft