I have a few things I need to mention before I get started:

1 – The first time I reported on them, I got Tampa’s Coppertail Brewing confused with the soon-to-open Coppertop Brewing in Boynton Beach. Someone at Coppertail gently reminded me. I’m still a little embarassed.

2 – I need, need, need to get Coppertail’s bottle artwork as a computer wallpaper. Or art print. Or both. Need.

So, Coppertail Brewing is one of the newer breweries in Tampa, located in South Ybor across from the Ikea there (and what I would assume to be under or very close to the Selmon Expressway). It’s named for the sea monster that the owner’s 5-year old daughter says lives in Tampa Bay. You never really see the monster’s head, just the tail. This, of course, is omnipresent in pretty much all of Coppertail’s materials. I think this monster needs a plush doll. Because plush.

They just started bottling, but distribution is pretty limited to just the Tampa area. They’re hoping to expand to St. Pete soon. So it was lucky that, while in Tampa, I managed to procure a few bottles of theirs. Cool bottles with awesome, awesome artwork. That I really do need.

So the first beer of theirs that I tried and will be reviewing is their IPA, Free Dive (American India Pale Ale, 5.9% ABV).

There’s a big, bright citrus bouquet right of the bat. And it’s more of a citrus smell of citrus, not like a hop smell of citrus. Yes, the two are different.

That citrus-forward tendency shines in the taste as well. It’s just not brutal as some other IPAs are. This one is more fruity, more sessionable, and a lot less challengingly bitter than many others I’ve tried. The sweetness helps to cut the hoppy bitterness and really make this a smooth, easily drinkable beer. And one I would have again, even though it is an IPA.

With awesome artwork on the bottle. 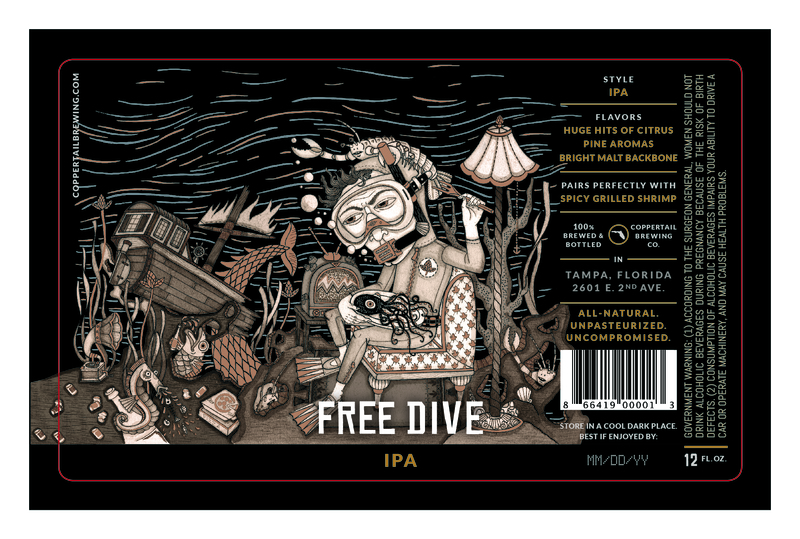 A better look at the Free Dive bottle artwork. I mean, look at that! Image courtesy of beermenus.com