I could tell you this is a simple article about a witbier, but that’s just no fun. Instead, let’s give you the background.

First, unless you have been living under a rock for the past month, you will know that the State of Florida finally legalized the 64 oz. growler, the most popular size of take-home draft beer containers around the country. Sure, we had 32 oz growlers and 128 oz. growlers, but nothing in the middle. Now, we’re good.

Most of the major breweries celebrated with growler release parties. SaltWater Brewery in Delray Beach, however, partnered with Adam Fine from Native Brewing and Craft Beer Cartel in Ft. Lauderdale to take it one step further. They brewed a special Belgian witbier that was aged on raspberries and blueberries. How to name it?

Well, if you head back to 1992, you’ll get the debut album from California’s Sublime. That album’s name was 40 oz. to Freedom, an obvious play on 40 oz. malt liquor bottles. Here’s the self titled single, which is probably NSFW:

From there, it’s just a short hop to switching the name around a bit and calling the beer 64 Oz. to Freedom (Witbier, 5% ABV, 15 IBU). 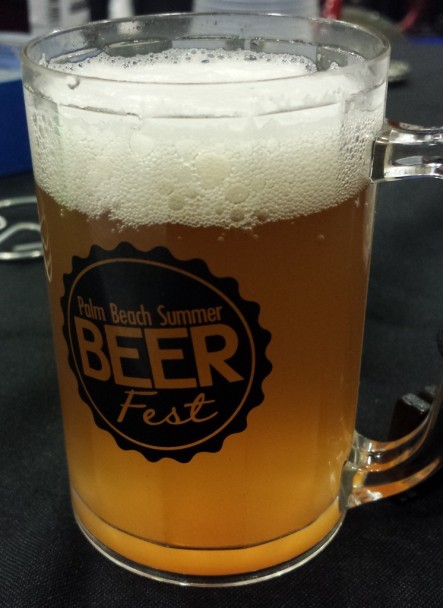 64 oz to Freedom by SaltWater Brewery and Native Brewing

Lucky for me, this was on draft at the recent 2015 Delray Beach Craft Beer Fest, so I was finally able to get some.

It’s very crisp. Witbiers aren’t known for any sort of crushing hoppiness, and this isn’t any exception. It’s very much a good, light wheat beer. The aroma belies the traditional flavors of orange and coriander that witbiers have, but the berries tend to be stronger.

That berry strength also comes through in the flavor of the beer. It’s very zippy and peppy, and the raspberries in particular complement this nicely. The berry flavors are also what tend to stick around on the palate after finishing, too. As a smooth, fruity beer, this is sure to please a lot of people, and should be a more permanent addition to SaltWater’s lineup.

I’ve said many times that I enjoy blogging about Florida beer and watching the craft in the state grow so far in such a short time. With events like the 64 oz. growler release happening and beers like 64 oz. to Freedom made to celebrate that, I look forward to many more happy celebrations.

But I don’t practice Santeria. (Get it? Maybe?)