Crazy Uncle Mike’s in Boca Raton is, for lack of a better term, a lot. The space has been around since the seventies, I believe, with a rotating list of restaurants that had the same theme, same menu, and ultimately shared the same fate.

It wasn’t until Mike Goodwin (Yes, there is a ‘Mike’), decided to completely revamp the entire facility to change it into a brand new style of business. Upfront is a gorgeous copper jacketed brewing system, headed up by brewmaster Corey Wilson, who has been in brewing in South Florida for many years. Working at a local homebrew store, he has seen basically everybody that currently has a name in South Florida brewing, but back when they were still in their home brewing phase. 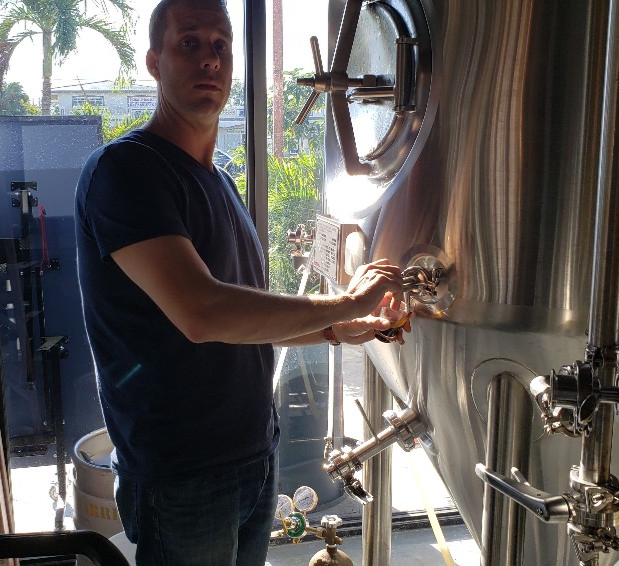 In the back is a full kitchen, with a rather large menu, including a small children’s menu which made me very happy to see. There is a full bar as well, with an extensive list of creatively mixed cocktails. It’s interesting to have the possibility of doing something like an Irish Car Bomb made with beer that was made on premises, if that’s your cup of tea.

It’s not necessarily mine, though.

It was an interesting change to take the space and transform it into a concert venue, and we actually got to go up onto the very meticulously crafted stage on our tour. In a former life, Mike was a higher up at Hard Rock in Las Vegas, so he knows the people to know and knows a great venue to give them to perform. Everything on the stage is, in essence, sound dampening and so the sound has only one place to go, out into the audience.

Around the back, past the giant wall that is fully astroturfed (yes, astroturf), they are building a little smoking beer garden patio, and that is where we got a full flight of everything that Mike’s currently had on tap. If you listen to the Florida Beer Podcast, and you should, you can hear our interview with Corey in episode 9 and get a quick rundown of each of these beers.

If you are like me and are more visual, here is everything that we were able to try.

Renegades of Funk (Saison, 6% ABV) – This collaboration with Pompano’s 26 Degree Brewing is a brettanomyces saison with yuzu and lemon thyme. Great aroma and a wonderful fruity taste.

Don’t Be a Prick (Gose, 5.2% ABV, 18 IBU) – Prickly pear gose, I think it has a big kick of sourness, but I’m also a pansy when it comes to sour beers like this. Cute color and a solid body.

Don’t Be Salty (Gose, 5.2% ABV, 13 IBU) – Another gose, this time with coriander, orange peel, and Hawaiian pink salt. He uses strains like lactobacillus and brevis platerium and kettle sours the beer over a few days.

Physical Graffiti (IPA, 7.5% ABV, 55 IBU) – One of their IPAs, brewed with mosaic, citra, and a ton cashmere hops from Michigan. If you’re as big a Led Zeppelin fan as they are, you’ll understand how the name of the beer works with the hop name. The beer’s a simple, clean IPA, and runs right down the line between standard and New England.

Get The Red Out (Amber Ale, 5% ABV) – Corey’s favorite and another solid Led Zep reference. It’s a perfect, bready, and toasty red ale that is immensely satisfying.

Roger That (Irish Stout, 4.5% ABV, 22 IBU) – The first beer of theirs I tried, and really classically delicious. Perfect and clean.

There is a lot going on at Crazy Uncle Mike’s, and they do a good job of being a nice, cool place to hang out when the sun is up, transitioning into a wild place to party at night. They definitely do a good job of attracting the FAU College crowd as well.

It’s not hard to find where they are, and I would definitely encourage following them on social media to be able to catch up with all the craziness that is going on there. Especially if you can do an Irish Car Bomb with local beer.

Tell me how it is.