Because hockey, of course.
Since craft beer is (thankfully) starting to be readily available everywhere, it was only a matter of time before arenas followed suit. And the BB&T Center in Sunrise, home of the Florida Panthers, luckily is no exception.Now, if you’ve read the blog before, you may have noticed me mention the Miami Brewing Co. Beer Garden. It’s directly above Pantherland, and features the four core Miami Brewing beers on draft: Gator Tail (Brown Ale, 5.3%, 30 IBU), Vice IPA (American IPA, 7.1% ABV, 60 IBU), mango wheat ale Shark Bait (Pale Wheat Ale, 5.3% ABV, 11 IBU), and the flagship coconut ale Big Rod (American Blonde Ale, 5.3% ABV, 17 IBU).

Also, follow the Florida Beer Blog Instagram and Twitter accounts. During select games this season I’ll be hosting tastings at the Beer Garden. Free beer, y’all.There’s plenty of other beer selections on the lower floor (it’s an arena, after all), including a craft beer cart near section 106. And, for Florida beer, they also have Sunshine State Pils (Pilsner, 5.3% ABV, 43 IBU) from Florida Beer Co. Which is always nice.

If you can swing it, however, Club Red is a blast.

Club Red at the BB&T Center

It’s their all-inclusive VIP club, right behind the benches. And being all-inclusive, you can have as much as you want. There’s a pretty good food selection:

And, of course, beer, including options from Miami Brewing.

I sure wish I could have gone to this.

Flight of beers at Wynwood Brewing

As part of the filming, the brewers created a keg of Ultimate Vice Miami, described by Brigoni as “a wheat porter that is fermented with a hefeweizen yeast with maduros (sweet plaintains), key limes and aged in a rum barrel from Key West.”

The Miami episode of Brew Dogs will air on Esquire sometime in late May-early June and will feature clips of other Florida breweries like J. Wakefield, Funky Buddha, Saltwater Brewery, and Due South Brewing.

I’m an unabashed fan of the Tampa Bay Lightning, but it’s pretty difficult for me to go to see them. Heck, I almost never get to see them on TV. But if I have the chance to get to the newly-renamed Amalie Arena, I’m going.

Plus, with the recent explosion of local craft beers, I figured I would go to see what, if any, Florida beers I could find.

Edit – She won! Yay! Congratulations to Melissa and thank you to everyone that voted to help out one of your own in the craft beer community.

Okay, here’s the background: Squaremouth is a travel insurance company based in St. Petersburg, FL. Basically, if you want to insure future travel, they can apparently do it all.

They have also been running a Thank You campaign to promote service industry employees in and around St. Pete. It involved visits to plenty of service locations (hotels, restaurants, etc.) in the area, saw who gave them the absolute best customer service (anonymously, of course), and presented the top 20 with $1,000.

One of those 20 people was Melissa Wolf from 3 Daughters Brewing.

END_OF_DOCUMENT_TOKEN_TO_BE_REPLACED

You are stinky and you need to take a shower. And of course you should use beer for that.

I have no idea who decided beer should be added to soap, but that person should receive a Nobel prize. There are a number of homegrown soap makers that I have noticed use beer in their soaps (look for a craft fair in your area. You’ll find at least one soap maker, and it’s always good to support local artisans).

There are some other breweries that have a line of their beers made into soaps. Cigar City has some of these, and the Maduro soap is a great one to use, BTW. In that vein, I received a message a few weeks ago from Traci Williams of St. Pete Soaps. She’s a new soapmaker in the St. Petersburg area, and has a line of soap that is made exclusively with 3 Daughters Brewing‘s fantastic Beach Blonde Ale. END_OF_DOCUMENT_TOKEN_TO_BE_REPLACED

This post is going to be a bit more image heavy than what you may be used to from me, but that’s because I got me an exclusive tour of the brand spankin’ new bottling line at Oakland Park’s Funky Buddha Brewery!

It’s been pretty big news around here recently that Funky Buddha will be bottling and distributing in the South Florida market (Palm Beach, Broward, Miami-Dade, & Monroe) starting on December 10th. By the end of 2015 they will be expanding state-wide. END_OF_DOCUMENT_TOKEN_TO_BE_REPLACED

I need to start by saying the concept of homebrewing scares the hell out of me. The concept of doing anything that can have that many things go wrong, and not know if I actually succeeded for at least a month makes me pretty nervous. A few years ago my beautiful wife got me a Mr. Beer kit, and I have used it with good success, but the relative lack of changeability in the recipes offered made me feel like I wasn’t going to be able to truly experience homebrewing.

So, while in Melbourne, I found out about Brock’s Homebrew Supply from an internet search and went to check it out. 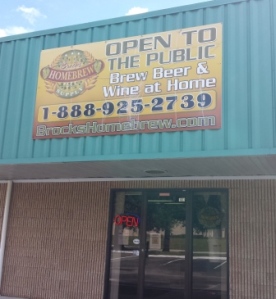 END_OF_DOCUMENT_TOKEN_TO_BE_REPLACED

Broward New Times‘ orginal Beerfest is back for 2014. This event will be taking place this Saturday, October 25th at Esplanade Park in Downtown Ft. Lauderdale. It’s next to Broward Center for the Performing Arts, Museum of Science and Discovery, and a pretty convenient parking garage.

It’s going to be pretty awesome, and there are going to be a lot of good Florida breweries there like Funky Buddha, Cigar City, Mack House, Miami Brewing, Florida Beer Co., Florida Avenue, Big Storm, Islamorada, and LauderAle. You’ll also be seeing other brewers as Missouri’s native son Boulevard Brewing, Kona Brewing from Hawaii, Chicago’s Goose Island, and a lot more. Over 100 beers in all.

I will be there covering the event, and you can be there too! FOR FREE!

Here’s what you have to do:

A winner will be randomly picked at 10 AM Friday morning to receive two General Admission tickets to Beerfest 2014!

If you can’t wait and want $10 off the purchase of General Admission tickets right now, head to the Beerfest 2014 ticket page and put in the code 10GA11 for $10 off! This code expires at 10 PM tonight, so act fast! Good luck!

Hope to see you there…

It's not quite this scary. And probably a lot more entertaining.
NEW EPISODE!
See? Told you so. Separated at birth.
Pool time? Pool time.