Sorry, I have had quite the backlog of things happening, both blog related and personal, so I haven’t been able to get to this post as fast as I would have liked. Anyway, I was able to head to the Palm Beach Summer Beer Fest a few weeks ago. I have a lot to report on, and some of the breweries I visited deserve their own pages, which I will get to in due time.

Today’s post is going to be a general overview of some of the breweries I visited at SBF. Many of these breweries are ones I have reported on already in the past. Some are brand new, and there will be others I want to devote entire posts to in the very near future. I also have a few from outside Florida, because I do that sometimes. It’s rare, but it happens. All of them I really wanted to mention, such as: 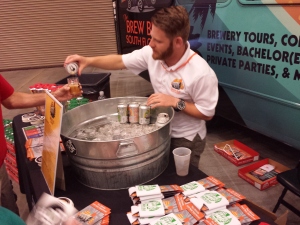 Brew Bus Brewing. Brew Bus Brewing started in Tampa as sort of a beer-fueled day trip, and has since expanded to Ft. Lauderdale and Miami. But, since they drive riders to other breweries, might as well provide some beers of your own, you know? The beers are brewed by Cigar City, but are all their own. Even the names are sly references to the buses they use to shuttle others around. I’ll write a bigger post about them later (and they have a few beers you should be buying right now), but today I had their Double Decker English Porter. Really dark, nicely chewy with a great body and tons of malty flavor. It’s good they’re available at Total Wine. I have a can awaiting consumption now.

Rooney’s. Okay, the big reason I tried them is because they’re from Pittsburgh, and my wife loves the ‘Burgh. They were at SBF with their Lager (light drinking, smooth, not too strong) and their Irish Ale (big, hoppy, biting, with an okay color). I think we were in agreement that we were slightly more impressed with the lager.

St. Bernadus. Outside of the U.S., it’s easy to be fans of beers from places like Germany, England, Ireland, and so on. Heck, one of my favorite session beers is from Morocco. But I love me some Belgian beer (even if they did beat the U.S. in this year’s World Cup). I have always been a fan of Belgian Abbey ales. Florida has a lot of great Belgian-style ales, too. But Belgium has it on lock, let me tell you. And I have always seen the bottles of St. Bernadus around, but have never tried it.

I know why that monk is so happy…

I sure was stupid. The Extra 4 was good in the malty sweet way that abbey ales should be, but Abt 12 is easily the best Belgian I have tasted. For non-Florida brews, Abt 12 is the best one of the event for me. It has a supremely sweet, malty smooth, and silty, velvety texture many beers could only aspire to. Must get more. Or just move to Belgium and become a monk myself.

Inlet Brewing Co. Inlet’s beers fall under the Monk in the Trunk moniker. Monk because they brew certified organic Belgian-style beers and Trunk because… well… I dunno. I’ll ask them later. They’re based in Jupiter Fl., not too far from the big Ft. Lauderdale/Miami base I reside in. And while their beers are available all over the place, I never had the chance to find them on draft. Got the chance to try their Belgian IPA, Monk IPA. I’ve made it fairly well known my particular preferences towards IPAs, but the Belgian spin they had on their IPA really works wonders. The sweetness and malt from the Belgian really serves to hamper some of the overly bitter flavors from the hoppiness, resulting in a pretty flavorful and enjoyable beer. I need to find more.

Ace Cider. Hooray for card-themed ciders! Can’t explain why, but I like that. They’re from CA and had a few of their ciders available, 2 of which we tried. Joker Hard cider is a slightly sweet, crisp cider that is pretty standard. Their pumpkin cider is sweet, with an explosion of big pumpkin flavors my wife really loved and I enjoyed. It’ll be great when fall is here! 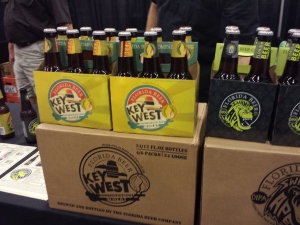 Florida Beer Co. The biggest brewery in the state was duly represented, of course. I have never been able to develop a taste for Swamp Ape, since it’s such an insane IPA. The Key West line is pretty good, with Southernmost Wheat being a good standard hefeweizen on a warm summer day (I love Florida…)

Funky Buddha. Of course Funky Buddha is there. Of course. They’re the biggest in South Florida, and they’re getting ready to release in stores soon. So, of course, they had run out of a few of their beers with as popular as they were. I did get a few in, including their Crusher IPA (which, truth be told, was a good, standard, hoppy IPA) and their Blueberry Cobbler. It’s a brown ale that has a blueberry flavor, but it’s well in the background so it doesn’t stand out too much. I would have actually liked more of it to come out, especially considering FB is no stranger to massive fruit flavors. 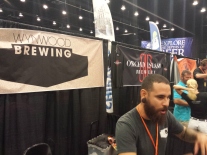 Wynwood Brewing. Once again, I got to Wynwood a little late. I did manage to snag a little of the Pop’s Porter, which is as smooth and meaty a porter as you’re ever going to find, or want to. It really satisfies. Teaches me to be late to the fun stuff… 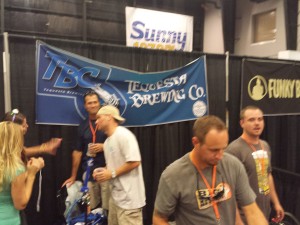 Tequesta Brewing Co. Let me start by saying that Tequesta Brewing deserves a bigger, more detailed write-up than what I am about to give them. With the sheer amount of brews available and the incredible hospitality they showed me, I could easily do several articles on them. And I plan to, as soon as I can make it to Tequesta (which is just north of Jupiter).

While talking to them, it was pretty clear they exemplified what I love in a Florida brewer: love of the land and it’s natural flavors. While chatting with them I got a chance to try their Jackfruit Sour, made with locally-grown Jackfruit (they’re very close to the Indian River area, world-renown for some fantastic citrus). I am loving that fruit sours are making it big time, and this Jackfruit Sour is a great example. The Jackfruit isn’t overly sweet, just mature enough to give the sour a nice bite and feel. I am readily kicking myself for not having more of their brews.

I had a busy day. Plus, I have write ups coming from presenting sponsor Saltwater Brewery, as well as Lagerhead, Holy Waters, Orange Blossom, Orchid Island, and Native Brewing. Hang in there, readers. I have a lot more on the way!

About a week ago, this post started circulating around the internet. It’s a listing of what the writer calls “The ten best ’emerging’ beer towns.” Naturally, I was happy to say that I was pleased when Florida’s own Tampa came in at number one. Bolstered by the likes of Cigar City, Dunedin Brewery, 3 Daughters, Green Bench, and Florida Avenue, the author (and any self-respecting beer aficionado) would easily be able to call Tampa a Florida craftbeer mecca.

And then I pondered further. And I realized that Tampa has the ‘craft beer mecca’ title pretty well established. Jacksonville is, too. Just look at Bold City, Intuition, Engine 15, Pinglehead, and so on.

For my money, the emerging craft beer town in Florida is Miami.

Seriously, take a look at what the city has. Miami Brewing got started a few years ago and is now distributing across the region. Wynwood Brewing is a year old and is starting to bottle their special brews. Titanic Brewing is established, so is The Abbey. Plus M.I.A., J. Wakefield, and Concrete Beach Brewery are all about to open tap rooms. And if you add Ft. Lauderdale to the mix, then you can add places like LauderAle, Coral Springs Tap House, and the venerated Funky Buddha.

To the author, I say Tampa is a wonderful city (Go Lightning) and a craft beer haven all Floridians are proud of. But they are nicely established. For the major movers in the Florida craft beer industry, set you sights southward.