The rum is coming.

The importance of this spirit will be on display on April 15th through 17th, when Miami will one again host the Miami Rum Renaissance Festival. This festival will bring an impressive of rum producers, purchasers, and enthusiasts for 3 days of conferences, seminars, competitions, tiki mugs, and (of course) rum.

END_OF_DOCUMENT_TOKEN_TO_BE_REPLACED

I am really excited to see Florida growing in several new and exciting industries. Sure, I’ve been talking about beer for a few years ago, but the Sunshine State is now stating to really get involved in my second favorite alcoholic beverage: Rum.

Up until now, all rums you find here have been pretty much Caribbean affairs. That is finally starting to change. I know there are a few distilleries in the Keys, St. Augustine Distillery just started releasing their rums, South Florida Distillery and their Fwaygo blanco rum is tearing up Ft. Lauderdale.

And now we have Wicked Dolphin, a rum distilled in the Southwest Florida town of Cape Coral.

END_OF_DOCUMENT_TOKEN_TO_BE_REPLACED

Of course you do. I do. And this one kinda fell into my lap, so naturally I had to share it. Enjoy.

END_OF_DOCUMENT_TOKEN_TO_BE_REPLACED

Sure, most craft beer drinkers know the wonders that is Octoberfest. And some of them even know the German origins behind the festival.

But that’s just you. How Octoberfest is your town?

Thanks to Trulia, we can see exactly how Octoberfest cities in Florida aren thanks to something they called ‘The Octoberfest Index.’

So, this is open only to cities with populations north of 100,000 residents. Trulia took those cities, calculated the number of breweries, number of bars, number of bottle shops, and number of German Americans to arrive at a number between 1 and 100.

The top city in the US, interestingly enough, was Traverse City, Michigan. Here, rank ordered, are the top ten in the state of Florida:

END_OF_DOCUMENT_TOKEN_TO_BE_REPLACED

From time to time I do have the right to write about non-beer things, especially if they promote the great state of Florida. So when Avi Aisenberg, proprietor of South Florida Distillers, contacted me, naturally, I jumped at the chance to visit.

South Florida Distillers, registered with the Florida Dept. of Agriculture and Consumer Services

END_OF_DOCUMENT_TOKEN_TO_BE_REPLACED

I manage to score an appearance on West Palm Beach radio’s wildly popular KVJ Show, mornings on 97.9 WRMF. More specifically, the After the Show Podcast. I was there along with Brian from Due South Brewing and Ryan from Copper Blues in West Palm.

Hanging out with producer Dennys just before going on the air.

The whole podcast is available here; the fun starts at 29:15. You can even hear my wife in the background, too!

Plus, as a result, I got free tickets to this July’s Palm Beach Summer Beer Fest! Yay! 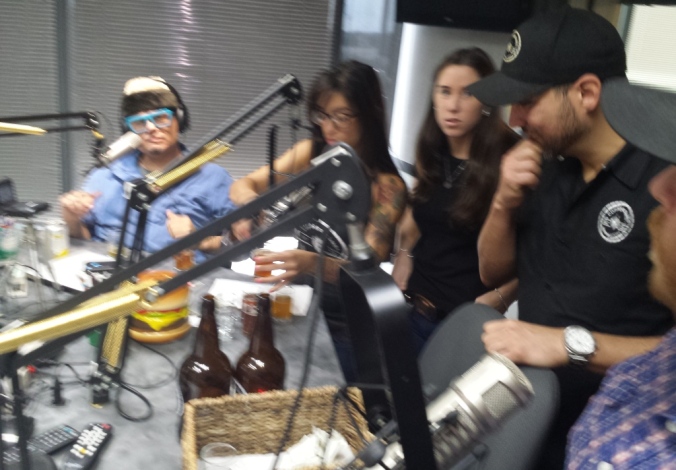 So I’ll see everyone there, and special thanks to KVJ for the fun time.

It’s been quite incredible to see everything the blog has done. I never dreamed that so many people would be interested in reading about Florida beer, especially in countries all over the world. Seriously. I got readers for Saudi Arabia to Sweden. It was quite awesome.

I noticed that you all do seem to love reading about certain breweries and beers, and nothing matched the explosion when I posted the review about Duff Beer a few months ago.

Rest assured, I have a lot more beer reviews and news up on deck, and I have no intention of slowing down anytime soon. If you don’t already, don’t forget to find me on Facebook, Twitter, Instagram, or drop me a line at floridabeerblog@gmail.com.